“Reusing used clothing is key to advancing the circular economy. This plant is a benchmark in textile management, it prevents tons of waste from ending up in landfills. " This was stated this morning by the Minister of the Environment, Housing and Agriculture, Paloma Martín, after visiting the Humana textile reuse preparation plant, located in Leganés (Madrid).

Accompanied by the general director of Circular Economy of the Community of Madrid, Cristina Aparicio, the counselor added that "with the reuse of clothing we not only avoid a greater consumption of raw materials and give a new life to our garments, but also we avoid CO2 emissions ”.

Both have toured the largest complex in Spain dedicated to the management of textile waste, located in Leganés, accompanied by the general director of Humana, Elisabeth Molnar, who has highlighted the environmental benefit of reuse and the contribution of clothing management used to the circular economy.

The Leganés facility was inaugurated in 2010 and expanded in 2018. Its 10,000 m2 of surface house the textile waste from the collection points that the entity has in the Community of Madrid, Galicia, Asturias, Castilla y León, Castilla-La Mancha and Andalusia. It has a staff of 80 people; the team specialized in sorting processes an average of 1,200 kg per person per day.

"The Community of Madrid is fully committed to the challenges of the circular economy," explained Paloma Martín, "we are committed hand in hand with civil society and private initiative to develop projects of this level that help us advance in the sustainability challenges. By 2022 we have increased the budget of the General Directorate of the Circular Economy by 61% to deepen projects aimed at reusing materials. We also have a clear commitment to innovation, so that we are going to promote chairs with universities. The Madrid region has three universities that have a specific master's degree in circular economy and we are going to work with them to find new technologies and new ways to use those materials that reach the containers ”.

Humana CEO Elisabeth Molnar explained: “We give a second life to the textile waste we recover. Nine out of ten garments that arrive at this Leganés plant have a second life, through reuse and recycling. It is a manual process supported by semi-mechanized means, meticulous and agile at the same time, which guarantees the best use of clothing, footwear, accessories and home textiles that have been donated to us. This is how we convert waste into resources and endow it with a social purpose ”.

The preparation for reuse, the recycling of textile fibers and the energy recovery of used textiles that cannot be used are the main characteristics that allow a circular economy model to be applied to the management of used textiles. Humana concentrates its efforts on reuse to convert waste that cannot be avoided into resources; Its activity dates back to 1987, which is why the management of textile waste is at the forefront of the circular economy.

It is the second visit by a senior public official that the Humana plant has received in less than a month: on November 19 it was attended by the European Commissioner for the Environment, Oceans and Fisheries, Virginijus Sinkevičius, and the Secretary of State for Environment, Hugo Morán.

How much clothing is recovered in the Community of Madrid

Humana has recovered 2,173 tons of used textiles in the Community of Madrid during the first half of 2021, to give them a second life through reuse or recycling. The selective collection of textile waste represents an increase of 48% compared to the same period last year (1,468 tons). The 2,173 tons recovered by Humana are equivalent to 9.8 million garments whose management, which will allow them to extend their useful life, will entail a double benefit: the first is environmental, because it reduces the generation of waste and prevents them from ending up in a landfill. In addition, the recovery of textile waste so far this year represents a saving of 6,887 tons of CO2 not emitted into the atmosphere.

Every year each citizen discards between 20 and 30 kg of textiles. In the Community of Madrid approximately 140,000 tons of textile waste are generated annually, but only one tenth of what we generate in our homes is selectively recovered to promote its reuse or recycling; the rest is thrown away in other fractions and ends up in a landfill. 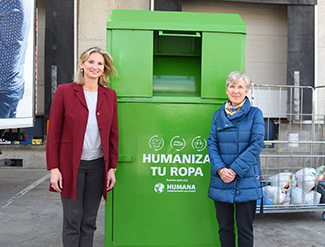 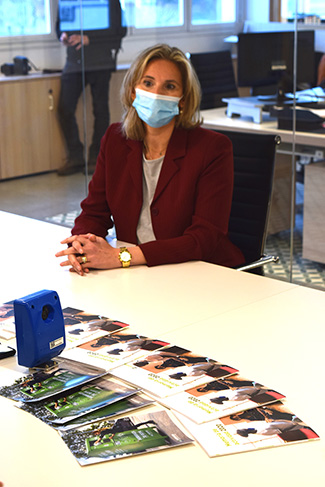 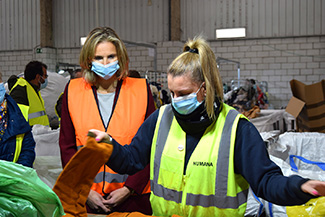