The Kavango population in Namibia is at the brink of a climate emergency. The communities had to face a drought situation for the past three years so that we have to redouble our efforts and support them to obtain more crops that are abundant for their families. That way they will get enough food and improve their diet.

DAPP Namibia, which is a local member of Humana, promotes a project in Kavango since 2015 which consists of the training of small farmers in the use of conservation agriculture methods in order to achieve a more efficient use of the scarce water resources they have.

Areas, which were completely barren lands, have now become green thanks to the efforts and elements used, such as solar-powered water pumps. However, this is not enough. If the drought persists, the situation will be unsustainable for those communities.

Now it’s time to fight alongside the families in Kavango by making a donation for their training in the use of conservation agriculture methods, the purchase of seeds, the maintenance and purchasing of water pumps with which they can continue to transform arid areas into agricultural fields.

Please contribute to this campaign and help those affected by the drought. Let’s make a difference in this climate emergency.

Effects of global warming in Namibia

Namibia is one of the countries that is experiencing the effects of global warming and this climatic emergency in which we are immersed. Its climate has always been dry and with variable rains; Climate change is causing these very difficult conditions to be accentuated for the population. The country has suffered drought since 2013. This year, the government has declared the emergency situation due to lack of rain, which has a quarter of the population in a state of food insecurity, after more than 27 months without raining, as reported by the local media.

The situation is extremely serious, especially in the case of people who depend on rainfall for their crops. Each rainless season means about six months of lack of provision of basic foods. With this, the families of small farmers with little income are left without resources to adapt to this terrible situation. According to the World Food Program and UNICEF, 24% of children under 5 suffer a stunted growth, which partly reflects the seriousness of the situation caused by the loss of basic crops in recent years and the subsequent deficit of nutritious foods.

In the East and West Kavango regions, the majority of the population depends on rainfed agriculture. Traditionally they have received enough rains to be able to cultivate, despite having a low fertile substrate. However, with the drought there are villages that have not seen a drop of rain in three years.

In 2015, DAPP Namibia, a local partner of the Humana Fundación Pueblo for Pueblo, initiated a project co-financed by the European Union to strengthen resilience in the face of this situation, using the Farmers Club model of the Federation Humana People to People. Since then, the project has trained some 700 women farmers in conservation agriculture techniques, which are based on increasing substrate yield and improving water use efficiency. In addition, each of the participating communities has created a community garden, equipped with solar-powered water pumps, thus guaranteeing the provision of water for crops.

As a result of the drought, they have barely managed to harvest enough corn and grain to feed for a few months, despite adopting more efficient cultivation techniques. In these circumstances, community gardens have proven to be essential for families, who have been able to save money they used to buy vegetables, since they now grow them themselves. Under normal conditions, they could even obtain surpluses and sell them in order to obtain some income. Project participants comment that working collaboratively has increased the sense of community between them, and they support each other. For example, if a woman cannot one day go to the garden to work, her companions will take care of her plot or sell her products on her behalf in case they achieve a good harvest. This social support also represents a vital element in the face of the harsh conditions facing the community.

This project tries to prepare the families with a battery of resources with which to face adverse conditions such as a prolonged drought. With these resources, they can adapt to changes as they arrive and diversify their sources of resources. Thus, horticulture and a more collaborative economy have improved its socioeconomic situation.

At the end of the project period co-financed by the European Union in August of this year, 20 Farmers Club had installed water pumps powered by solar energy in their common gardens, which allowed to obtain better crops with abundant vegetables. The objective is also that as soon as the rains arrive they get surpluses whose sale will allow them to earn between 20 and 35 euros per month These income can be used to educate their children, the purchase of small animals such as goats or chickens, the payment of some expenses doctor or the purchase of cereals to complement family nutrition.

Three experts on climate change and sustainable agriculture from Humana People to People are already accredited to participate in the Blue Zone of the event.

The Blue Zone corresponds to the space administered by the United Nations in which the following activities will take place: 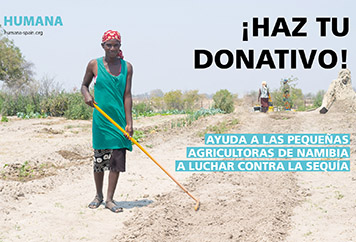