COP23, India and biogas for fighting against climate change

COP23, India and biogas for fighting against climate change

This week diplomats, leaders and civil society are meeting in Bonn, Germany for another round of climate talks. India has already made its mark – with the country’s chief negotiator, Ravi Shankar Prasad intervening on the first day when he remarked that if (rich) nations don’t follow the decisions taken in the previous COPs, what confidence do developing countries have that the decisions taken in this COP23 would be honoured.  India knows all too well the effects of changing climates and has been pegged as a frontline state in the fight against it. Climate change has heavily impacted numerous sectors such as agriculture, water resources, forestry, and energy. Whilst no one is immune to climate change, its repercussions hit the poor harder than anyone else.

Humana People to People India has joined hands with rural famers in Rajasthan State to build sustainable communities. Initiatives include reducing dependencies on fossil fuels, supporting famers and merchants and encouraging green practices through the promotion of cleaner environmentally friendly models. These all contribute to mitigating and adapting to the growing challenge of climate change. The idea is to empower the rural farmers into building coping mechanisms which assist to improve their rural livelihood thus protecting the environment in the process.

Rajasthan is a drought prone state with large herds of cattle (about 10.13% of the country’s livestock population). Humana People to People have worked with communities to set up biogas plants thereby ensuring that dung generated by the community’s animals is made available for generation of biogas. Biogas plants also produce an organic fertilizer called slurry as a by-product. Slurry is a safe, nutrient-rich alternative to chemical fertilizers that can be applied to crops and trees.

“Biogas for Enhanced Quality of Life” was a 3 year project which started in 2014 and phased out in 2016. It was implemented by Humana People to People India. The project benefitted 100 villages in Dausa district. Under the project 400 Biogas plants were constructed. From the Biogas plants families get access to clean energy used for cooking and lighting. The use of bio-slurry, the by-product of the fermentation process, is used as farm manure resulting in increased agricultural output. This process also reduces the expenditure on chemical fertilizers including pesticides and relieves the workloads of rural women in particular.

An analysis of the impact of this project shows that improvements were not just made in agricultural output but that it had a positive influence at the family level. The following is an extract from the external evaluation of the Biogas for Enhanced Quality of Life Project, Dausa, Rajasthan, India:

“Sugni Gurjar and Ratiram Gurjar, aged 45 and 52 respectively, are residents of Garhdoobi, Bandikui. The family has 7 adult members and 6 school going children. The family’s primary fuel source prior to the biogas construction was fuelwood, which was later substituted almost entirely by biogas.

The family has an active kitchen garden of around 0.5 ha, on which they grow vegetables such as eggplant, leafy vegetables, chilies, peas and other seasonal vegetables. The produce is entirely consumed by the members of the family.

The family had started exclusively using biogas slurry in the vegetable garden, and this was the third harvest after the introduction of slurry. The family reported that the yield was higher than earlier when they used fertilizers and chemicals. In fact they saw significant improvement in the last harvest, perhaps due to the fact that it takes time for the nature of the soil to change in response to the manure application.

The size of the vegetables has increased and they taste better now. The family also saw this superior produce as a prospective means of earning in the future by selling their produce, and now it plans to allocate more land to their vegetable garden.”

Humana People to People India has facilitated construction of 737 Biogas plants across the states of Rajasthan and Haryana, directly impacting more than 4 332 people over the last 6 years.  An additional 200 Biogas plants are expected to be constructed in the third phase project ending in 2019. 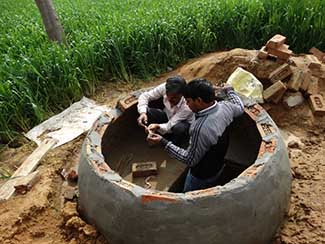 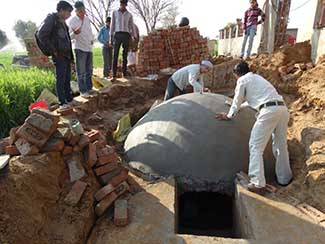