40,000 kg of used clothing prepared for reuse every day in Leganés

40,000 kg of used clothing prepared for reuse every day in Leganés

Humana's preparation for reuse plant in Leganés is the largest center in Spain dedicated to the management of used textiles, inaugurated in 2010 and expanded in 2018: in its 10,000 square meters of surface, textile waste from the collection points that the entity has in the Community of Madrid, Galicia, Asturias, Castilla y León, Castilla-La Mancha and Andalusia.

The Humana plant has a staff of 85 people specialized in the processing of clothing and footwear.

"It is a manual process supported by semi-mechanized means, meticulous and agile at the same time, which guarantees the best use of clothing, footwear, accessories and home textiles that have been donated to us, to provide them with a second life through reuse or recycling. This is how we convert waste into resources and endow it with a social purpose ”, says Rafael Mas, Director of Projects and External Relations of the Foundation.

In the first nine months of this year, Humana has recovered 3,449 tons of used textile in the Community of Madrid. This amount is equivalent to 7.7 million garments.

Responsible management of textile waste implies a double benefit: the first is environmental, because it reduces the generation of waste and prevents it from ending up in a landfill. Each kg of clothing that has a second life and does not end up in a landfill to be incinerated avoids the emission of 3,169 kg of CO2, according to the European Commission. From January to September, the management of textile waste recovered in the Community of Madrid has avoided the emission of 10,900 tons of CO2.

The second benefit is social: it consists of the creation of green jobs, Humana generates an indefinite job for every 30,000 kg of textile collected. In addition, the resources obtained are used for social projects: after more than three decades of activity, three million people have been involved in development programs in the countries of the South through local counterparts or partners; These are projects focused on the training of primary school teachers, the promotion of sustainable agriculture or the fight against HIV / AIDS, among other actions. 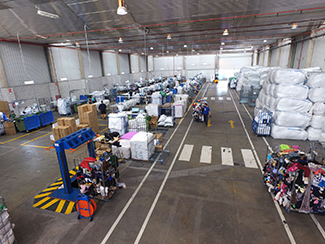 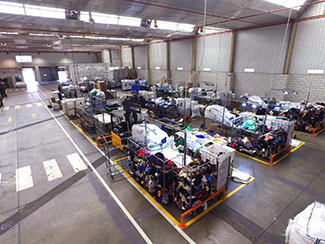