On World AIDS Day Humana People to People support the call to end inequalities and end AIDS globally. For more than 20 years Humana have reached over 20 million people with HIV prevention messages in Africa and Asia.

The theme for World AIDS Day in 2021 is “End inequalities. End AIDS. End pandemics.” Economic, social, cultural and legal inequalities must be ended as a matter of urgency if we are to end AIDS by 2030.

This is a long-standing global promise, the urgency of which has only increased. In 2015, all countries pledged to reduce inequalities within and between countries as part of the Sustainable Development Goals. The Global AIDS Strategy 2021–2026: End Inequalities, End AIDS and the Political Declaration on AIDS adopted at the 2021 United Nations High-Level Meeting on AIDS have ending inequalities at their core.

Without bold action to ensure that everyone, regardless of their ethnicity, gender, sexual orientation, and socioeconomic background, has equitable access to HIV services, the world will miss the targets to end AIDS by 2030. Moreover, we have seen globally how these same inequalities are prolonging the COVID-19 pandemic and a spiralling social and economic crisis.

Communities living with and affected by AIDS are best placed to direct and address HIV prevention and response, but they are yet to be fully engaged.  Humana People to People’s Total Control of the Epidemic (TCE) is a well-established community-based and access for all HIV/AIDS response programme, which strengthens social cohesion and builds people-centred defence systems. TCE’s approach to fighting HIV/AIDS, inequalities and pandemics places people and communities at the forefront.

Under the slogan, “Only the people can liberate themselves from AIDS, the epidemic,” our TCE programme supports people to take control of their own health by equipping communities with knowledge and tools to reduce stigma and increase access to treatment and care. Community engagement plays a key role in achieving people-led and locally-driven initiatives to find missing people with HIV, connect them with services, ensure treatment adherence and achieve viral suppression to stop further transmission.

With our focus on the poorest and most marginalized, we have supported HIV/AIDS national response in Angola, Botswana, Democratic Republic of the Congo, Guinea Bissau, Malawi, Mozambique, Namibia, South Africa, Zambia and Zimbabwe as well as China and India.

This World AIDS Day, let’s join UNAIDS in reminding governments all over the world that global inequalities affect us all, no matter who we are or where we are from. Let’s join the demand for action to end inequalities, end AIDS and end all other pandemics. 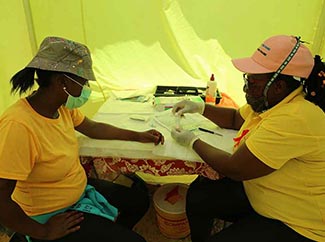 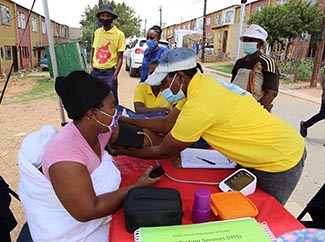