Humana has actively participated one more year in the European Development Days, the most important development cooperation event in Europe organized in Brussels by the European Commission. The balance is positive.

On June 7, during the first day of the event, Humana organized a debate under the title 'Bringing Health Services to Hard-To-Reach Migrant Mining Populations in Southern Africa through multi-stakeholder partnerships'. Poonam Dhavan, Global Coordinator for Migration Health Assistance of the IOM, acted as moderator of this appointment, in which the speakers were:

Morgan assured during the event that in projects such as TIMS, various actors (companies, third sector organizations, health services and the community itself, among others), were gathered, and a theoretical space of collaboration  is generated among them. However, since they all have certain limitations of action, this space of collaboration only becomes reality when two or more of them decide to transfer those limits and favor the joint work. Morgan highlighted the experience accumulated in this regard by Anglo American, one of the largest mining companies in the world, implementing several programs to combat HIV / AIDS.

The speakers also stressed the importance of funding in projects such as these, targeted at communities and especially complex population groups, such as the case of workers in the mining sector of Sub-Saharan Africa.

Renewable energy and climate change
Humana's participation in the EDD also revolved around the presentation of the results of the 'Renewable energy for rural development in Bissora-Oio'  Foundation and ADPP project, framed in the ACP-EU Energy Facility, based on the improvement of access to sustainable and accessible energy services for rural and peri-urban populations, in this case in the Oio Region.

On the 7th, Pilarini Tembo, Project Leader, carried out a 'Pitchpresentation' (similar to the 'PechaKucha' format): it had 120 seconds and 4 images of the project to present the keys to the developed work and its impact: 2,600 small farmers Involved, mostly, women; Installation of 51 photovoltaic systems to generate electric light and energy in 51 community installations; Creation of 26 solar water pumping systems; Construction of seven production centers to facilitate access to processing machines for local crops.

In addition, Humana had a stand at the Global Village, dedicated to this project. During the two days of the EDD, the activities and presentations on the fight against climate change were followed, as well as the role of renewable energy in this struggle and the role of women and their empowerment in this type of action. Therefore, the event has turned out to be a great opportunity to share knowledge and experience in this area with other actors in the world of development cooperation. 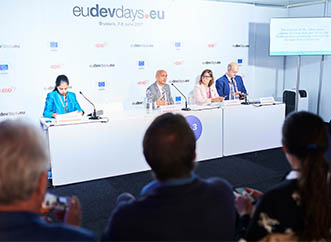 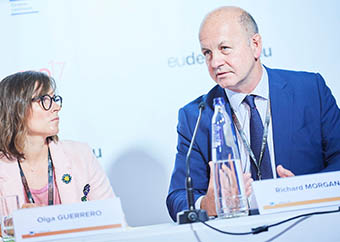 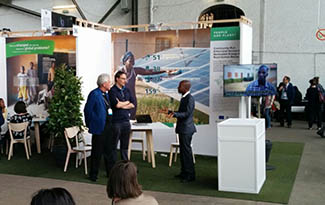