More than 200 people, including employees, friends and members of the organization, participated yesterday in the Open House Day organized at the headquarters of Humana in L'Ametlla del Vallès, Barcelona, ??on the occasion of Human Day 2012 and the celebration of the XXV Anniversary entity.

The event was held the ceremony of the III Humana Recycling Awards, for the area of ??Catalonia. The institutions and organizations that won first prize in the various categories are as follows:

*Municipalities with partnership agreement
* Sant Quirze del Vallès. Most textile kgs per capita collected in 2011
* Reus. Increased growth 2011/2010
* Breaking out. Most of kgs collected in 2011

*Other Municipalities
* Barcelona. Most of kgs collected in 2011

*Private Partners
* Parking Barcelona. Most of kgs of fabric collected per container in 2011
* Carrefour Castelldefels. Increased growth 2011/2010
* Alcampo Sant Quirze. Most of kgs collected in 2011

Cooperation exhibition
Apart from the awards ceremony, there was a sign on Cooperation and Textile Recycling Seminar. The aim of this exhibition is to show the reality of the communities in which Humana conducts its projects through everyday items both for their work and their work at home. Wells and rope pumps, improved stoves, solar panels, mosquito nets, HIV test on ground, become essential instruments to carry out cooperation projects since dotting the population base infrastructure which makes a significant improvement in their lives. The exhibition is made up of some of these elements, as well as illustrative panels on their functioning and role within cooperation projects.

On September 17, at the sorting plant in Valderrubio Humana (Granada), in Lisbon on 24 and 27 will take place in Leganes similar events, which also include the Awards Textile Recycling for public and private entities their respective areas of influence. 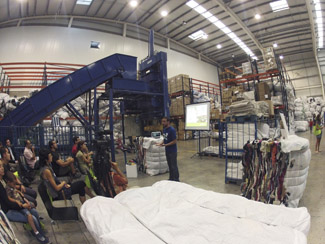 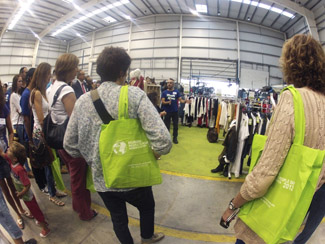