The textile takes a leading role in the Forum of Cities

The textile takes a leading role in the Forum of Cities

The textile waste has been one of the protagonists of the Debate Table 'Residuos e Innovación. Separate for recycling 'that took place yesterday, Wednesday, June 13, within the framework of the Forum of Cities. The textile has occupied in this table a paper to the height of other waste like the containers, the glass or the cardboard.

José David Moreno, National Promoter of the Foundation, said during his speech that "the textile is the most social and oldest residue," commenting that the primitive men were already dressed in furs, which they once discarded were no longer useful for them. At present, every year the Spaniards get rid of a million tons of clothes and footwear, but only 10% is recovered by an authorized manager.

Moreno defined the textile recovery sector as atomized and poorly organized. "There is no defined color for the clothing and footwear container, for example, in a scenario in which several types of operators coexist":

The National Promoter of the Foundation regretted that part of the Spanish municipalities prioritize the commodification of the management of textiles, and not worry about the final destination of the waste, its traceability and the transparency of the entire process.

He also alluded to the challenges, marked by the agenda of the European Union, which has determined that on January 1, 2025 the selective collection of textile waste will be mandatory in all municipalities. Moreno also pointed out the possible convenience or not of the creation of a management system for the textile, the extended responsibility of the producer and the payment by generation as elements to take into account to finish defining the framework of the sustainable management of this waste.

Finally, he sent a clear message: we are in an 'anomalous' scenario; The textile is a waste that has management costs that the manager himself fully assumes today. In some cases, it also assumes other costs via fees of various kinds implemented by the municipalities.

Packaging: innovation as the main strategy

Rosa Trigo, Technical and Innovation Director of Ecoembes, was commissioned to offer the vision of the field of recovery and recycling of packaging, ensuring that "public-private collaboration is one of the keys". In terms of innovation, he gave several examples of the work of Ecoembes, through The Circular Lab, the first laboratory dedicated to the circular economy of Europe, with 200 companies and 150 projects involved. Also highlighted SmartWaste, in which the key is to have an "intelligent waste, but beyond pure sensory applied to the 590,000 container containers that exist; the key is to generate useful information for administrations and citizens ". In this sense, Trigo also spoke of "big data and artificial intelligence" to know in depth the profile of the more than 8,000 Spanish municipalities as far as waste generation is concerned.

Paper: the importance of market equilibrium

Manuel Domínguez, General Secretary of Repacar, explained that the mission of the recuperators of paper is to "create green wealth and employment through the 160 plants of recovery of paper and cardboard that agglutinate". When describing this segment, Domínguez referred to the problems that have been dragging on since last year as a result of China's protectionist policy, one of the main importers of recovered paper. So much so, that the volume of product sold to Chinese companies has fallen by 34%. In addition, the local authorities have modified the quality and improper criteria, which generates insecurity in the manager.

As far as innovation is concerned, the General Secretary of Repacar commented that they are working on new container models with anti-vandalism systems and on the installation of sensors to make collections more efficient.

Laura García, Technical Director of Operations of Ecovidrio, began her talk by talking about the 20th anniversary of the entity and the "20 years, so we have been offering citizens the opportunity to exercise their right to recycle". In these two decades, Ecovidrio has recovered 11 million tons of packaging, 50% of which comes from the hospitality industry. García pointed out that some of the keys to his organization are "innovation as a way of thinking and efficiency". He gave as an example the mini igloos destined for homes, of which more than 83,000 have already been distributed: "the goal is for citizens to have easier recycling".

Karla Chaves, Director General of the forthcoming Communication for Sustainability, responsible for the Ecolones Project, from Costa Rica, offered a different perspective by setting an example of the work that is being carried out in the Central American country. Chaves considers waste management essential to help achieve the Sustainable Development Goals, since it is related in one way or another to 10 of them.

Ecolones is based on the first virtual ecomoneda that gives value to sustainability. It is given in exchange for valuables that are separated at home and taken to recycling through an incentive system in which they can be exchanged for discounts on sustainable products and services. In this way, recycling is promoted and a green and supportive economy is promoted where space is given to companies and entrepreneurs who offer sustainable and healthy products. 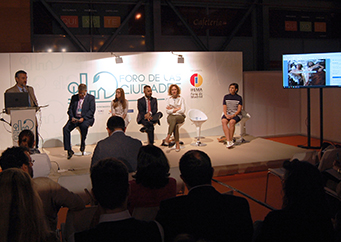 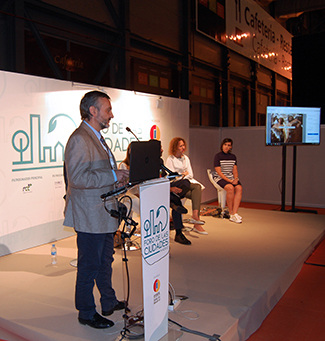 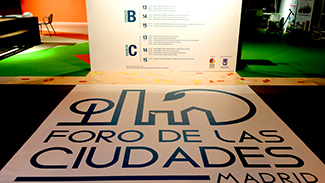