Advancing towards the Circular Economy. 04.19.Valencia

Advancing towards the Circular Economy. 04.19.Valencia

On April, 19, the Foundation organizes in Valencia the event 'Advancing towards the Circular Economy', with two fundamental sections:

The venue chosen for the celebration of this event is the Ateneo Mercantil of Valencia. Among the guests are representatives of the Ministry of Agriculture, Fisheries, Food and Environment MAPAMA, the Generalitat Valenciana, the Provincial Council and the City of Valencia, as well as the main public and private collaborators of the Foundation in the region.

Replacing the traditional paradigm of linear economy (extracting-producing-consuming-throwing) by a circular one is essential for the Planet. It is untenable to continue applying an economic model that exhausts natural resources, hence the importance of doing so by another that contemplates waste as resources.

We live a crucial moment in this regard after the establishment of the "Pact for a Circular Economy" with which more than fifty autonomic and local administrations, business associations and other entities commit themselves to the elaboration of the so-called Spanish Strategy for the Economy Circular (EEEC), under public consultation until 12, february. Humana Fundación Pueblo Pueblo is one of the entities adhered to this pact.

The Foundation promotes this event in order to contribute to the debate on the importance of ending a linear economic model.

Humana, the Valencian Community and the circular economy

Recently the Generalitat Valeciana, through its president, Ximo Puig, has announced that they are working on a pact to promote the circular economy in the Community, in which entrepreneurs, consumer associations, municipalities and political parties will participate.

The organization currently has 650 containers in the Valencian Community for the selective collection of used textiles, which annually collect around 1,424 tonnes of clothing and footwear. The Foundation has two transfer plants, located in Torrent (Valencia) and Alicante, respectively, from which the textile is sent to the preparation plant for the reuse of Ametlla del Vallès.

Humana feels fully identified with the Valencian Community, aware that it is one of the referents in selective collection of clothing and footwear, preparation for the reuse and application of a circular economic model to the management of textile waste. 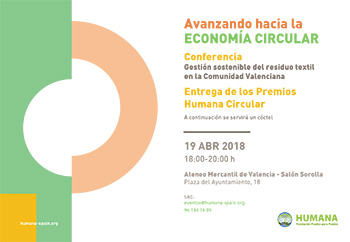 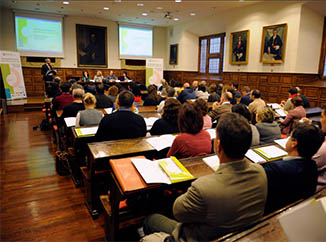