Humana Fundación Pueblo para Pueblo and the Galician company of food distribution Vegalsa-Eroski have delivered today a donation of 18,772 euros to four Galician social entities, thanks to the resources generated with the textile recovered in the containers installed in 58 Vegalsa-Eroski in Galicia. The delivery took place at an event held at the Eroski Center in Teo, in A Coruña.

The four organizations will allocate the funds received to different projects that will be developed throughout 2019, focused on assisting people in situations of vulnerability and / or risk of social exclusion.

According to the director of Institutional Relations, Communication and CSR of Vegalsa-Eroski, Gabriela González, this donation, fruit of the collaboration with Humana, "responds to the synergies between the two priority axes of our CSR actions, such as caring for environment and solidarity. On the one hand, we are committed to the circular economy as an engine of transformation from sustainability and at the same time, we allocate the benefits obtained with these actions to social projects that contribute to the development of our community ".

For his part, Gustavo Pampín, National Promoter of Humana, said during the ceremony that "this action undertaken by Vegalsa-Eroski is part of the Local Support Program of the Foundation. Our goal is to turn a waste, in this case, the textile, into a resource, whose valorization allows us to generate funds for initiatives that have a clear impact at a social and local level ".

Through this initiative Vegalsa-Eroski, with the support of Humana, reaffirms its commitment to the circular economy and fosters among its clients two key values ??of its Corporate Social Responsibility: caring for the environment and solidarity. The sustainable management of used textiles favors the generation of funds that are reverted to society, in this case, to four Galician social entities. Humana and Vegalsa-Eroski have collaborated since 2014 in order to promote environmental protection and local support. 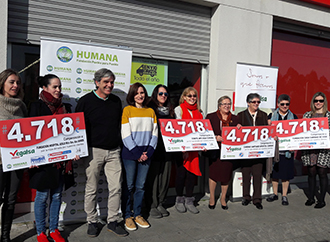 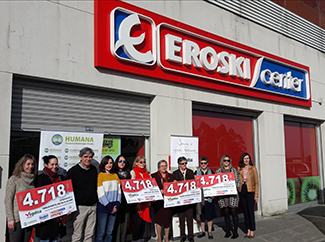