This Saturday ripping out the children\'s public workshops

This Saturday ripping out the children's public workshops

The House of Culture of Olias del Rey (Toledo) welcomes this Saturday 12th November between 11 and 15 hours, the first public workshop framed childhood Humana education development project is taking place, with funding from the Spanish Agency for International Development Cooperation (AECID). This workshop is open to all children and their families, is the complement of educational sessions organized between 18 and 21 October at the Colegio Pedro Garcia Melendo Olias del Rey, which involved 74 students in fifth and sixth grade. On Saturday November 19 a public workshop organized human like the Plaza Mayor of Titusville, also between 11 and 15 hours, as an end to the activities that have taken place in the Virgin of the Rosary College of the suburb.

Also in Sevilla la Nueva
On the other hand, the next will begin November 22 workshops and sessions at Sevilla la Nueva within the project 'puppets' that involve estimates about 180 students in the municipality. A total of three schools in Sevilla la Nueva those involved: the Duke of Rivas, whose educational workshops will be held from 22 to 25 November, with boys and girls in fifth and sixth grade, the Sevillian Anton, on December 2 , January 13 and 3 and February 24 respectively, with fifth-grade students, and the Nova Hispalis, on March 23 and April 13, with students in third through sixth grade. 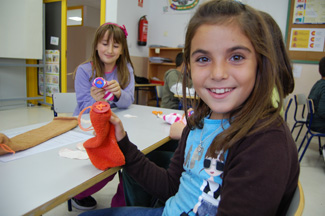