Professional Training for at-risk women and youth in Mozambique

Professional Training for at-risk women and youth in Mozambique

Despite having one of the most dynamic economies in Africa, Mozambique’s Human Development Index places it at 178 out of 187 countries. High GDP growth over the last decade has not been distributed evenly, and has been accompanied by growing inequality as well.

The country’s education levels remain among the lowest in the world. Approximately 350,000 young people join the labour market every year, but less than 18,000 jobs are created by the private sector. A generally informal economy mixed with a weak private sector and poor education levels has resulted in a serious domestic skills shortage, as well as a growing population of disenfranchised young people.

For the past 33 years ADPP Mozambique has supported and promoted education for development in Mozambique. In response to the increasing challenges related to unemployment and lack of skills of qualifications in the Mozambican workforce, in 2012 the organisation began a 3-year initiative entitled Community Centres for Development of Competencies (CCDC) with funding from the European Commission through the European Union Delegation to Maputo.

The objective of the project was to stimulate the creation of employment through the delivery of market-relevant short-term vocational courses in the provinces of Chimoio, Maputo, Nampula, and Sofala. This would prepare 3,500 adults and youths for specific employment or to set up their own businesses through accessing micro-credit initiatives.

When the initiative ended this year, a total of 3,859 students (996 females) had graduated from 12 different courses across the four centres. 35.5% of graduates gained employment in companies where they had completed internships during the course, and 51.25% began their own small-scale businesses. All four centres also have in place income generation activities in order to help keep courses at an accessible price for future students.
30 year-old graduate Nadia Tomas is one such successful graduate from this program. Despite having doubts as to what people might think of a female labourer, Nadia completed a painting course in 2013. The single mother of two graduated with the top grade in her class, “I enjoyed the course tremendously,” she said. After completing the course, she decided to start her own venture, and her first contract was to pain the shop of a local businessman. “When he saw how good a job I had done, he gave me a contract for the rest of his shops, and acted as my referee for potential customers after that.”

Her business has since expanded and she has employed a fellow graduate from her course, Manuel. One of her recent contracts was worth 1,200,000 meticais (€22,600). “I’m so thankful for the opportunity to do the course and the support I received from my family.” 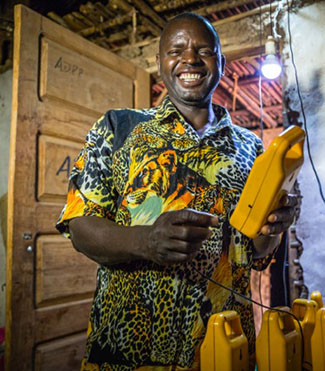 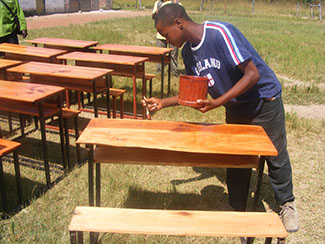