From waste to resource: the road to the circular economy

From waste to resource: the road to the circular economy

It is untenable to continue applying an economic model that depletes natural resources, hence the importance of doing so for another that considers waste as resources. Precisely the proper management of waste, something essential to apply the circular economy, plays a key role the commitment of administrations and citizenship. These are some of the conclusions of the technical conference "Moving towards the circular economy. Sustainable management of waste ", which was held  yesterday in the Historic Building of the University of Oviedo with an attendance of 80 people.

The relevance of the presentations and the active participation of the attending public (representatives of administrations, companies and entities) have contributed to the success of the meeting, the first held in Oviedo on circular economy and sustainable waste management.

Margarita Ruiz Sáiz-Aja, Deputy General Deputy Director of Residues of the Ministry of Agriculture and Fisheries, Food and Environment (MAPAMA), focused her intervention on the Spanish Circular Economy Strategy, which is expected to be released at the beginning of next year. Ruiz Sáiz-Aja considers that it is not a waste plan but requires the involvement of other key sectors such as economy, industry, tourism and health. The circular economy would create 170,000 direct jobs in the waste management sector until 2035; they would save up to 600,000 million euros, which represents 8% of the turnover of the EU; it would improve competitiveness and security in the supply of raw materials, and reduce the amount of greenhouse gases (GHG) by 500 million tons.

For its part, María Elena Marañón, Director General of Prevention and Environmental Control of the Principado de Asturias, said that "in Asturias has not yet developed a specific circular economy strategy but they do apply different cross-cutting actions that drive it." In this sense, the Strategic Waste Plan of the Principality of Asturias (2017-2024) is under review, which has multiple measures aimed at promoting the prevention, reuse, recycling and material recovery of waste. In the Principality, between 30% and 35% of urban waste is recycled. "We must promote selective collection. The textile waste, for example, represents 8% of the rest fraction. It should reduce that figure and increase the amount of selective collection. "

Anabel Rodríguez, Executive Director of the Foundation for the Circular Economy pointed out that "let's not forget that paper holds everything. We have to act so that the measures are applied and there is a change in the management of all waste streams. We have to change the chip: we talk about waste but in reality they are resources ". Rodríguez encouraged "to introduce changes in the way of undertaking things and thinking of all the economic and social agents that intervene in the waste production process."

Ignacio Fernández del Páramo, Councilor for Town Planning and the Environment of the City of Oviedo, assured that "we are running out of time, there are limited resources and we do not manage them as we should". Fernandez has appealed to a rational consumption of resources and has pointed out the importance of cities betting on other consumption models. "From the administrations we must be the first to reach full recycling, by example," he added.

The Manager of COGERSA, Santiago Fernández, pointed out that "the role of the citizenry is fundamental for the separation at source of waste. However, before demanding the citizens and passing on that responsibility, other steps must be taken: we should be more demanding with the organisms and the administrations, so that they are exemplary and in their facilities selective collection and green purchases are made, for example ; require industries to make an adequate separation of waste, and to shopping centers. The citizen must be aware and convinced and, when these previous steps are overcome, it will be necessary to demand it ".

Ricardo Rodríguez, Head of Collection in Asturias, León and Navarra de Humana, said during his speech that "administrations and waste managers must be transparent in our objectives, processes and results. That is when the citizen will perfectly understand what we do and will be more willing to commit to sustainability. " We must convince the local administration of the benefits of waste management and of course we must do much more there where there is negativity towards selective collection, according to Rodríguez.

Javier Domínguez, Chairman of SOGAMA, explained that the entity, which celebrates its 25th anniversary this year, pointed out that in 2013, textile waste represented 8.3% of the rest fraction; three years later, the figure has been reduced to 5.3%. "It's a positive evolution thanks to Humana. However, we still talk about 41,000 tons of textiles that end up in the rest fraction and, therefore, can not be used. We still have work to do to separate well in origin, a joint work between Sogama, Humana and society ". Domínguez highlighted the investments that will be made to strengthen the circular economy.

On the other hand, Gustavo Pampin, from Humana National Promotion Department, remembered that the textile is the waste with greater capacity of reuse and aprovechamiento. "It is a resource with a social purpose," he said. And he has asked for the same level of recognition from the administrations and the citizenship as the rest of the fractions. "Humana has been present in Galicia since 1999 and collects around 2,100 tons of textile waste per year. If the SOGAMA plant reaches 41,000 tons of clothing as improper, the road to travel is great, "he assured and added:" Humana collects in Galicia 10% of everything it collects in Spain. If we collected more, we could reuse more, dedicate more resources to social ends and create more jobs. "

In the opinion of Luis Lamas, Councilor for Works and Services of the City of Carballo (A Coruña) "we must involve the public to achieve higher levels of selective collection with a continuous commitment from day to day, to make you feel proud of where lives". In this regard, he stressed the importance of citizen participation to warn of any incident related to the environment, "that trust is achieved with perseverance." "We must not impose or convince but involve citizens," he concluded.

Olatz Garde Mazkiaran, Environmental Educator of the Commonwealth of Sakana (Navarra) pointed out that "citizens are consumers and among all we must make a big change in habits to bet on another model of production and consumption. That is something that is not achieved from one day to the next. And there's no time left. The best way to convince citizens of all this is to show them how this commitment to the environment and sustainability benefits them, perhaps with fees and sanctions. "

The Professor of the University of Santiago de Compostela (USC), Felipe Macías, was resounding: "The waste is a resource, what we must do is to know very well the composition of our waste. We take many things to landfill because the legislation forces us to do so. I insist, we have to know our resources better and adopt better solutions.

Rubén Rosón, Councilor of Finance of the City of Oviedo, in charge of the closing ceremony, declared that "we will have to decide as a society if we work and stand on the side of what they want a more just and more sustainable world, or continue with an old practice that depletes resources ". And he cited three challenges that every society should respond to shortly: the automation of employment, the finitude of resources and the challenge of a time that imposes enormous speed on social transformation. 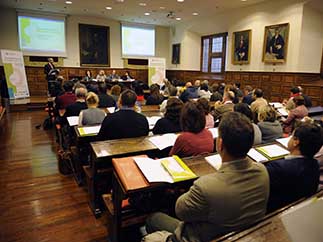 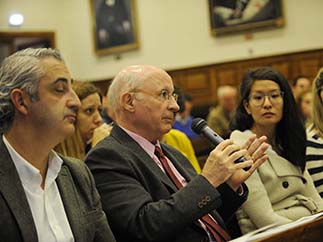